"The Humor in Christine Hohenstein's retro and abstract Collages" 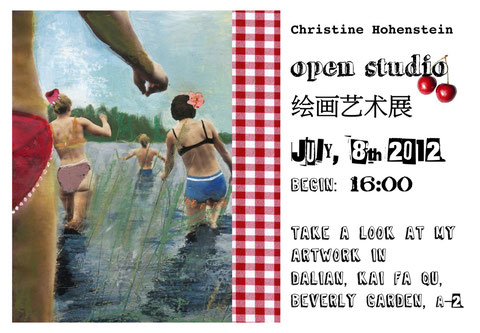 *The article in English*

Lush green meadows beneath the blue sky: cherry tart with whipped cream, diced red and white picnic blanket, beautiful women, smart roadsters and laundry fluttering in the wind. The blue sky is very important for somebody, who grew up in the Bavarian Forest!

And already we are in the midst of the fantasy world of Christine Hohenstein. Her cheerful and puzzling poetry plays with us. She juggles with our associations, memories and dreams. She lures with amusing clichés and tells a thousand stories of her own and others. Her painting titles are inspired by headlines of yester-yesterdays or the-day-after-tomorrows newspapers - for example "bubblegum for the eyes“, "bella Margherita" and "inner Bock Beer Festival"!

Christine talks about her own "Heidi-Alm-Storybook-childhood" in the Bavarian Forest. An ideal base for a creative life, in which she can continue to play and fantasize.

As a child she sewed clothes and bags for her puppets. In her apprenticeship as a tailor, it were primarily historic costumes, later haute couture dresses. "That was a lot of fun," says Christine. „But free, narrative, artistic work was far away and I missed contact with people...“ Looking for more, something deep and inspiring, she started over and began to study art and literature at the University of Erlangen-Nuremberg. "The best time of my life!"

How fortunate for her and for us all!

She paints pictures, overpaints postcards, experiments with collages. Accompanied by very good teachers, as she points out, she finally discovers and invents her very own style: Hopping between reality and fiction, inviting anybody who knows how to read it, to find their own stories in her pictures. The allegedly familiar reveals itself in the details of the collages: writings, figures and characters cut out of magazines and newspapers are placed in new contexts within painted spaces. Proportions change. Flowers become trees. The Eiffel Tower sits on a green meadow and the old “DKW” car of MY grandmother watches flowers being watered. Yes, that is possible!

For Christine Hohenstein takes a very special point of view of the world. Suddenly we are able to balance between heaven and the earth. On the fine wire of a brush stroke, we are attentive and sensitive to the slightest allusion. So beware! Now and then a spoilsport lures in some detail.

The 35-year old knows all to well, that one may also be luring in our own life. “It takes the right amount of humor and lightness to master ones life,” she says and that is exactly the message of her paintings.

“Do you like blue sky?” her chinese friends ask her. “Yesss!” Christine answers and is amazed about the smog over Beijing hanging so low, making it impossible to see the blue sky. Even more it amazes her that the people in Chinas capital city do not seem to miss the blue sky.

Christine Hohenstein moved to China last year. First she was surprised of her own wedding, then the decision was made to go to china for 3 years – for a start. Now she, her husband and cat Milla live in the chinese city of Dalian on the sea, about 1 hours flight east of Beijing. She describes her fear at the thought of having to move to china for such a long time. And in the next sentence she cites a poem by Rainer Maria Rilke:

You don't have to understand Life's nature,

then it becomes a grand affair.

Let every day just of itself occur

and happens upon the gift of many flowers.

For Christine this poem exactly describes her current situation. She reports excitedly about her everyday life in China, which gifts her precious new encounters every day. The middle kingdom and its people offer a never-ending stream of surprises. “If one opens up and keeps a good mood throughout the day, it is easy to get along in this very foreign foreign country. The Chinese are always cheerful, helpful, friendly and curious.”

Christine doesn’t only have locals as neighbors. The “expatriates” living in the international compound in Dalian are from Scotland, Ireland, Spain, France and Isreal – a very colorful combination, but not all of them enjoy this state of “being out of this world” as much as Christine. For her the chinese exile is “heaven on earth, a fulfilled dream!” Every day she spends time in her studio. She can stay as long as she wants and life an artist’s life without any distractions.

This kind of creative freedom was also possible back home in Bavaria, but never as boundless as in Dalian. Before moving to China, Christine worked as an Arts and German teacher in Munich for six years. Creative time-outs were scarce in these years. Whenever possible, Christine went to Italy. She has been visiting the small mountain village of “Civitella d’Agliano” close to Orvieto, since her studying days. Being a stranger has always sharpened her look on life. 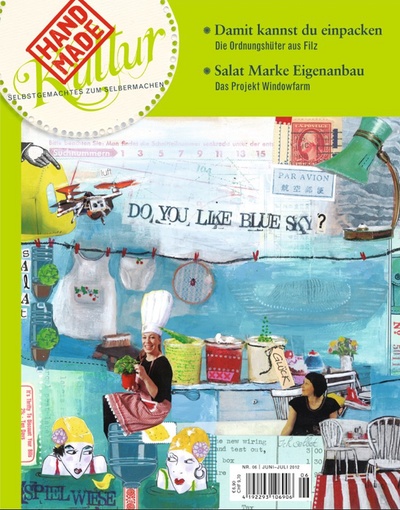 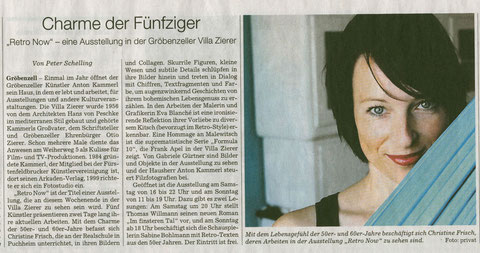 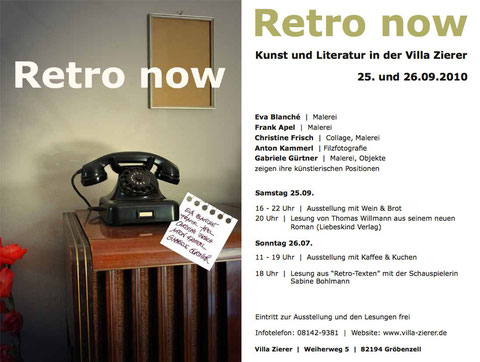